Another Round of Earthquakes

Yakutat was rocked again this morning,  by several strong earthquakes centered about 70 miles west of Gustavus between Lituya Bay and Cape Spencer.  Right around 3am,  residents were rolled out of their sleep by what seemed to be a quake lasting more than two minutes,  with two good sized jolts mixed in the middle.  According to the USGS,  they were two separate quakes measuring 4.7 and 5.9 beginning 44 seconds and 2 km apart.  7 more aftershocks between 4.5 and 3.8 hit the same area throughout the next two hours.

Yakutat had several earthquakes near Mt St Elias last week of a similar magnitude and frequency of aftershocks.  The largest was a 6.0,  93 km to the NNW.  Today’s quakes occurred 195 miles to the ESE of Yakutat. 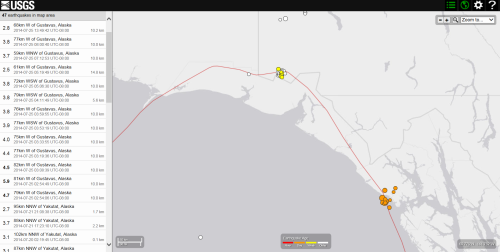 The two recent earthquake events on either side of Yakutat 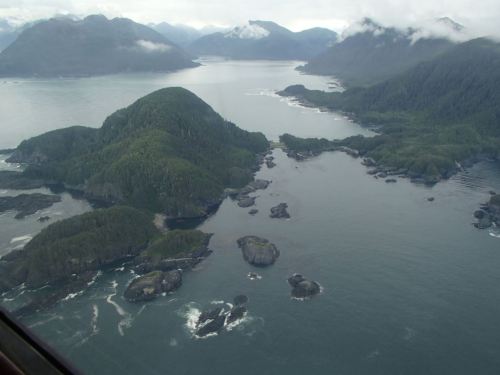 I happened to take a photo of the location of the quakes just yesterday!

Shaking me into Action

Not a lot of posts lately,  even though we have a lot to talk about…  I’ll try to get some written here in the next couple days,  so my apologies if an avalanche of posts come your way this week.  We had quite the earthquake shake this morning,  so I at least have to post about that!

At 3:58am this morning,  Teen and I were roused from our sleep to a 5.8 quake.  It was actually centered a little over 100 miles to the southeast of us closer to Haines,  AK,  but we sure did feel it here.  One of the stronger quakes we have seen in a couple years.  It could be that being on the second floor of the hangar helped to increase the swaying motion we felt too.

Here is the map location from the Alaska Earthquake Center (who will be here this weekend servicing their remote sensing sites by helicopter and operating from the hangar).

June 4th, 2014 Earthquake at 3:58am centered 49 miles west-southwest of Haines, Alaska and 113 miles east-southeast of Yakutat

Red lines on the map indicate our major fault lines.  If you move straight toward the ocean from the quake’s location (at a 45º angle down and left),  you can kind-of see Lituya Bay,  home of the largest wave ever recorded on earth.  In the 1958 quake centered there,  the hillside at the head of the bay collapsed,  creating a splash-wave that denuded the forest over 1,700 feet up the opposite hillside.  By the time the wave hit Cenotaph Island and the three fishing boats anchored in the bay,  it was between 30 and 100 feet high,  sinking two of the three boats.  It was quite a ride!  I’ll attach some photos from the ’58 quake below.

The region around Yakutat has had a lot of quake activity lately,  but most were too weak to feel.  Lots of little quakes tends to mean the plates are slipping gradually to relieve the pressure,  instead of having a really big catastrophic one like the 1958 and 1899 quakes that killed people around here.  We like little ones,  in other words…  No Tsunami warning was issued.

Hard to tell the damage in this, but it nearly topped the visible hillside!

The backside of Cenotaph Island 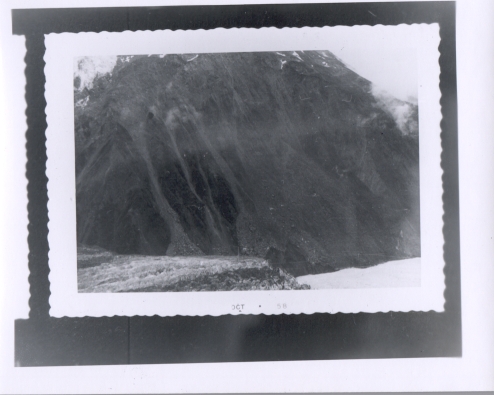 The hillside that collapsed and sloughed away into the water 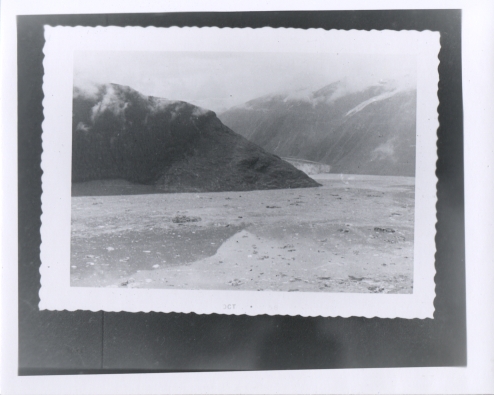 Sloughed area faded on the right side of the glacier, with the high point of the wave damage dead center

Looking from Lituya Glacier out toward the ocean from the slough 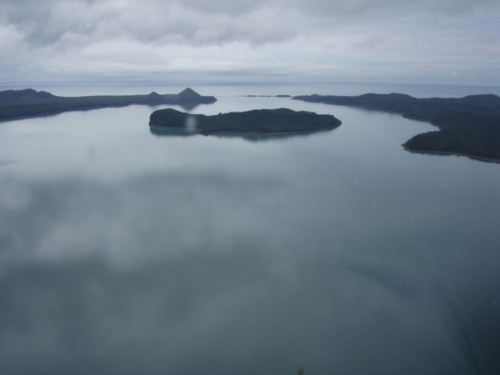 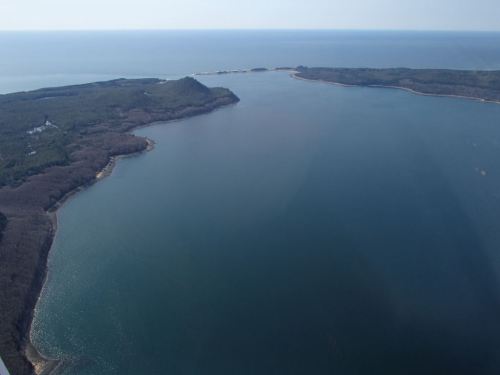 Taken a month ago, you can clearly see the brown stripe of the “bathtub ring” along the shore, where the spruce forest was killed and only willow and alder grows today

Last-Minute Trip to Juneau this Weekend

A friend needed to do some last-minute work in Gustavus and asked me if I was free on Friday…  So off we went!  Here are some pictures from the flight… 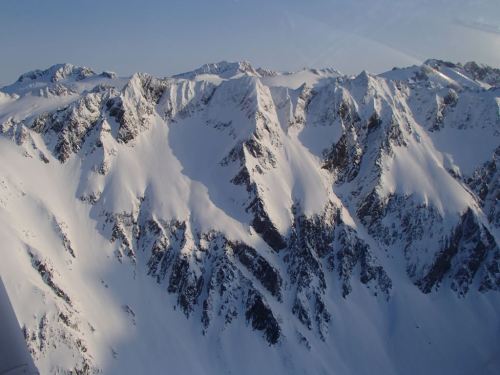 Lots of snow up there in the mountains, even though our sea-level snowpack was low this winter 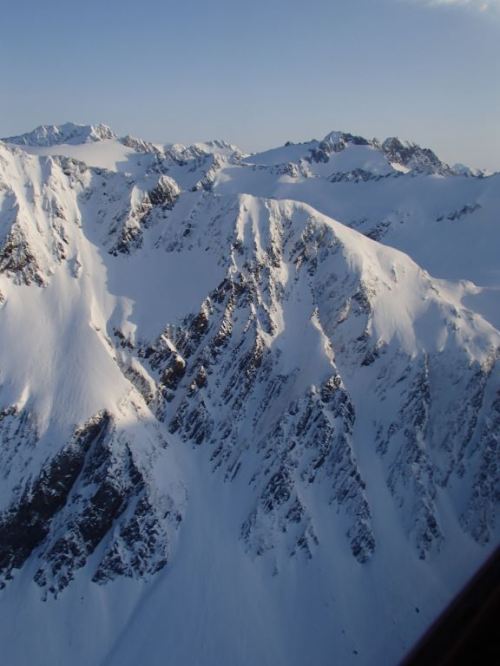 Coming up over the Brabazon Range – AKA our foothills

The mighty Alsek River is just a trickle in winter 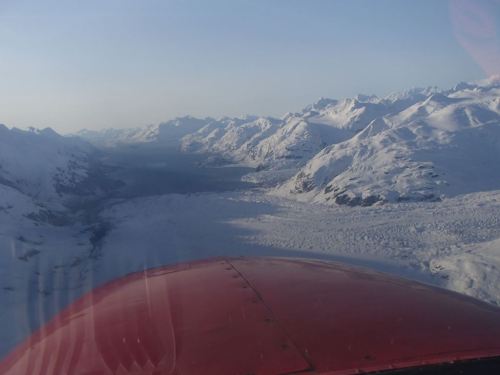 Coming out of Canada and down into Glacier Bay National Park

We dropped into Juneau to pick up parts from the FAA (leaving the kids with friends),  then off to Gustavus.  I dumped Dave there,  then went back to Juneau for Costco and Home Despot and pizza at Bullwinkle’s.  Saw Byron at Costco,  but he didn’t say “hi” to me (probably doesn’t know who the heck I am like any of the other little bugs he has tried to squish in his rise to power…).  Loaded the plane and off to retrieve Dave and home… 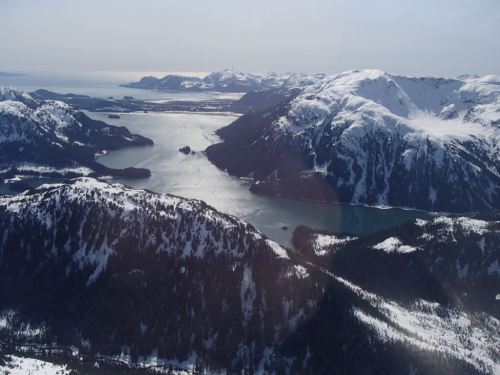 Dave was in a hurry to get back, so we took the shortcut over the mountains back instead of through the lower passes

There are some incredible looking remote rivers and streams throughout Glacier Bay – who cares about the glaciers!

Saw a few whales in Glacier Bay proper, but more out in the ocean later in the trip

This needs a chairlift… 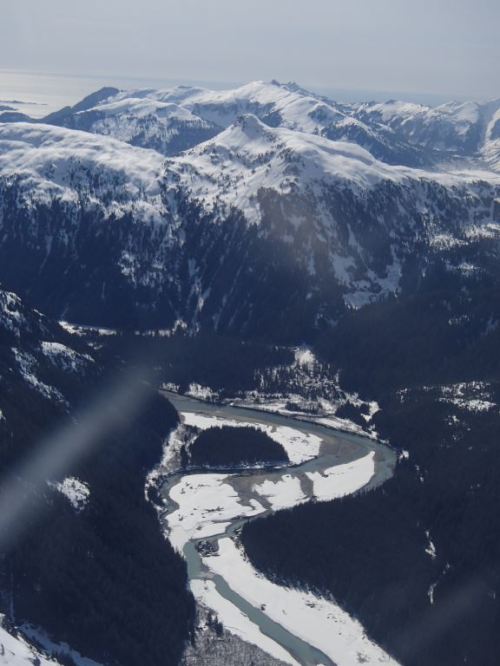 Another beautiful stream cutting through the mountain peaks

I’m so used to flying LOW…  I think this was the highest I have flown since flying the plane out of Denver!

Coming out to the coast, with more incredible-looking streams that see few visitors (if any) 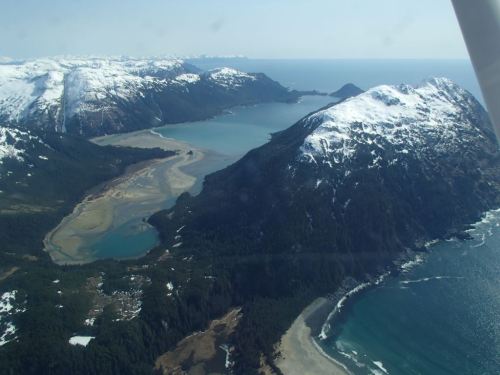 I think this valley is where I would have wanted to Homestead 150 years ago… Too late now!

Another angle of La Perouse

Lituya Bay – home of the largest wave ever recorded. You can still see the bathtub ring easily around the side of the bay from the giant wave in 1958 – the brown ring along the shore on the left side…

Mt Fairweather as viewed from the ocean

Sure a lot of whales out in the ocean from Cape Fairweather to Dry Bay!  Quite a few Grays and a couple Humpbacks traveling north.  Thousands of Stellar Sea Lion at the mouths of the Alsek and Akwe Rivers,  feeding on the Eulachon.  Two of the largest gatherings of these stinky beasts anywhere in the world.  The Akwe also had thousands of Trumpeter Swans all along the 10 miles of river as it runs down the coast.